Lost in the Supermarket


Lost in the Supermarket - Art and Consumerism

Inspired by a strange mix of Impressionism and a song by The Clash, this set of works includes some of my very first paintings. Originally I was interested in having a small art show to display these, but as the years went by I lost interest in the works. To be honest, I have had no idea what to do with these paintings. I never felt they were worthless, more like a little lost in regard to their ultimate purpose. 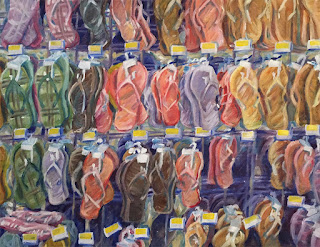 The idea came to me after seeing the Impressionist at the Musee d’Orsay. I realized that much of the artwork they created was about the appreciation of small moments in time and celebrations of French Culture. Upon coming back from vacation I was inspired to paint, but I had some trouble finding subjects, so I went to the supermarket.

At first it started out as a tongue in cheek critic of American Culture, but it evolved from a joke to a semi-real study. I found myself painting still lifes of the supermarket aisles. I started to notice the colors; how they all competed for dominance and I found an odd appreciation of canned food and cheese. In all seriousness, I found myself appreciating the value of
being able to go to a store and have food available to purchase. 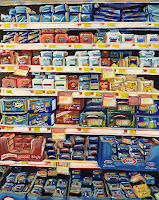 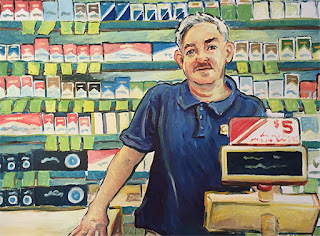 Soon I moved on to painting people in the stores. Most of the time I was too afraid to ask the customers and workers to take their photos so I moved on to painting people from advertisements.
Sometimes I had a pretty good idea of what I was trying to accomplish when painting these people. Other times I didn’t have a clear message, just some idea I thought was goofy. The idea was to use sensuality and go over the top trying to sell a product. The end result was pretty ridiculous seeing how I was pulling images and phrases out of the Sunday paper and Cosmopolitan magazine.

This series taught me a good deal about being an artist. I learned through trials and some big errors that as an artist you have a responsibility for your work and its message. Not that all work has to have a message, but just know what you are working with because sometimes it can be volatile. It is going to be seen by people and you are going to have to explain it. Be prepared to defend it and be prepared for people not to like it. Then get over it.

Most importantly, I learned how to put paint on a piece canvas. I’ll admit, some of these paintings I despise (mostly the ones with people in them, so like 50%), but if I had not created them, then I wouldn’t have learned anything. You can’t be so focused on making everything a home run. If you do you will be too afraid to even start. It’s ok to make crappy art, it’s how you learn.

In the end, I don’t really know what else to say about these paintings. Oh and they can be found for sale here: https://www.etsy.com/shop/AtelierLambert?ref=hdr_shop_menu&section_id=19727743

Posted by Unknown at 4:50 PM No comments: